People in WordPress are seriously talented. You guys rock!

Picking the best out of almost 100 entries was mind-boggling hard, to the point where I couldn’t really do it. So I had to call my book-loving buddy Tanja Kaaria to help me get my shit together. A few slaps in the face later, we finally got it.

So we analyzed every twitter and WordPress story, and we decided we’d split the best entries in two categories:

And guess what: there are awesome buttons waiting for you guys!

Now, I said I’d choose ONE winning entry, and I had to. But to everyone mentioned on BOTH categories: If I could, I’d fit you all in guest posts.

Also, thank you to EVERYONE who participated! You’re all AMAZING!

So, without further ado…

(Make sure to check their stuff. It’s amazing!)

here’s the button for you guys! Make sure to link the button back to the original post, otherwise people will be all like “Whaaa? I don’t believe you.” 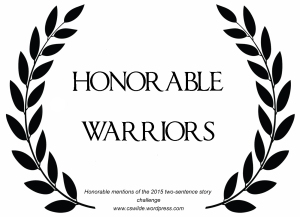 She took a small bite of the strangely smelling food on her fork and smiled politely. The different colored people surrounding her watched intently for her reaction.

Sam spent half a year saving to get Tara the engagement ring of her dreams. Now Sam has to wait anywhere from 22 hours to 3 days to get it back from Tiny, the German Shepherd.

Her footsteps pitter-pattered as she rushed to their secret meeting place even though her friends had warned her. “I don’t care,” she said, “I have to know.”

“Karma’s a bitch,” she whispered in the smoke filled air. Ella smirked as her step-sister’s house burnt to cinders.

“Everyone on the night bus was asleep, but he couldn’t sleep a wink; something was bothering him. He knew that it was because of her, who had told him the night before on their five-year anniversary that she couldn’t do this, and that she was sorry, so so sorry…”

“She knew how wrong it was to kiss the married man she loved, but she’s been waiting for this moment to happen. Tonight, of all nights, she was just a girl, getting kissed by the boy she liked.”

He gazed into her eyes as he said, “I do.” He watched through tears from behind a pillar.

The woman, drained and battered within an inch of her life, stared up at the dark stranger and whispered, “I have nothing left to give you.”

“You still have your soul which I’ll gladly take now.”

There was this girl I knew once in school who was taunted by bullies and abused by her alcoholic father. I had a chance to make a difference in her life…and failed.

“You’re getting weaker every minute,” said the doctor in a low, shaky voice. I knew that all he could see of me was a haggard, stick-thin figure in a hospital bed, so I offered a hopeful smile to prove him wrong.

(Their names belong in history)

here’s the button for you guys! Make sure to link the button back to the original post, otherwise people will be all like “Whaaa? I don’t believe you.”

Once upon a time they lived happily ever after, but now the King lay dead on the Castle floor. She kicked the poisoned apple away and watched it roll under the bed, surprised that he’d never seen it coming; after all, when in the history of the world had there ever been a Good Queen?

Through the unmapped wastes of space, the silver snake wound and coiled its way round planets and meteors, creeping ever closer to its goal. In the observatory, the astronomer watched, transfixed, first with curiosity, then with fear.

“Another day ruined,” he said at eight o’clock in the morning.
He burnt the bacon.

She was confused that her brother shed so many tears, it was just a stupid cat. She smiled, remembering how easily it broke.

Once upon a time they lived happily ever after, but now the King lay dead on the castle floor. She kicked the poisoned apple away and watched it roll under the bed, surprised that he’d never seen it coming; after all, when in the history of the world had there ever been a Good Queen?

Once again, thank you, everyone!

C.S. Wilde writes about fantastical worlds, love stories larger than life and epic battles. She also, quite obviously, sucks at writing an author bio. She finds it awkward that she must write this in the third person, and hopes you won’t notice.